Ladson, SC – In October 2015, upon releasing another bass and clicking his little “fish counter” for the 238th time, the legendary Ned Kehde paused to inspect the single Finesse WormZ™ at the end of his line. Little did he know it, but Kehde’s implausible performance had effectually established what would soon become known as the ElaZtech® World Record. Not that the humble Hall of Fame angler had advertised the fact. Nor will Kehde’s astounding tally appear in Guinness’ or any other official record book, any time soon. But if you know anything about Ned and his detailed angling logs, you understand it can only be legit—a fish-per-bait ratio no angler in their right mind would ever consider.

“That October, I emailed Daniel Nussbaum at Z-Man, telling him we had a four-inch green pumpkin Finesse WormZ that had caught 238 largemouth bass,” recalls Kehde. “Hadn’t kept a record of how many bluegills, crappie, green sunfish or other species it had tangled with. Daniel asked me to send the bait to him for their archives, which I did. I am guessing it could have tangled with perhaps 40 to 50 more largemouth bass before finally succumbing.”

It appears Kehde may have started something. For, this September, Brian Waldman of Brownsburg, Indiana took the record to another level, once again validating the inexplicable durability of Z-Man’s radical softbait material, ElaZtech. Nineteen outings and 32 hours of fishing between August 19 and September 16 produced an extraordinary 245 bass, 5 pumpkinseed sunfish, 2 bluegills, 2 green sunfish and 1 bullhead—all on a single Z-Man TRD TicklerZ. 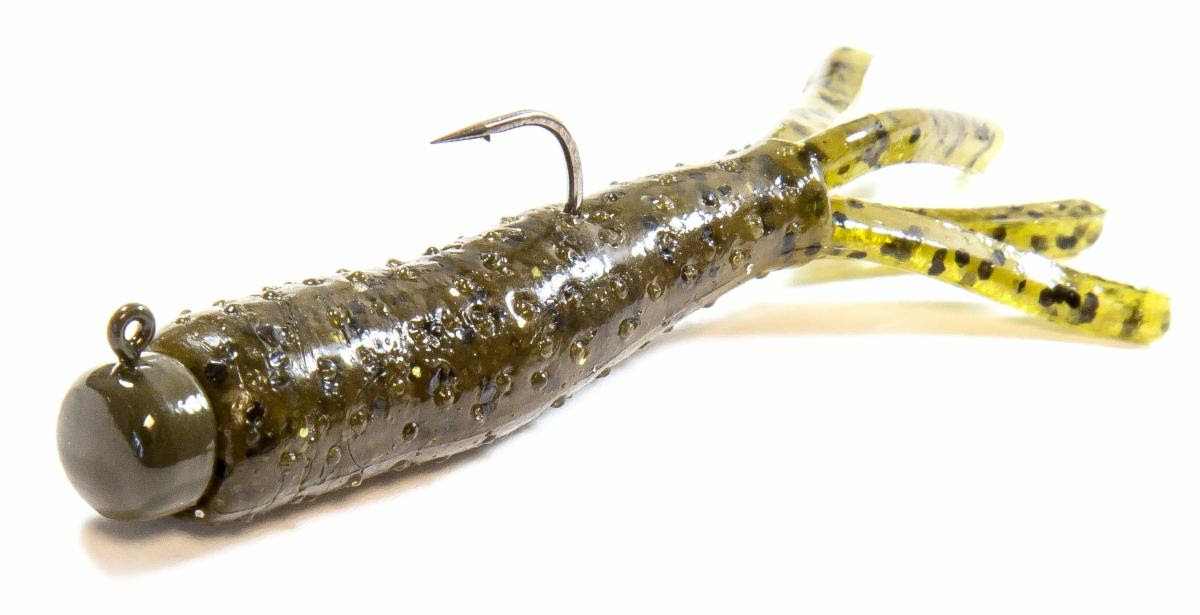 “At the same time, I’d been reading posts on a different fishing forum where anglers were boasting about catching six or more fish on a single Senko-style bait before it fell apart. Imagine, being satisfied catching six bass on one bait, while we’re catching more than 200 with ElaZtech!

“I’d recently purchased a couple bags of TRD TicklerZ—a 2.75-inch tentacle bait purported to catch everything that swims. Fishing a local pond on August 19, I caught 50 bass on a single jig and green pumpkin-pattern TicklerZ. Couldn’t believe how well the bait held up. Realized that the design of the TicklerZ might be amenable to making a go at taking down the record. So began my quest,” recollects Waldman. 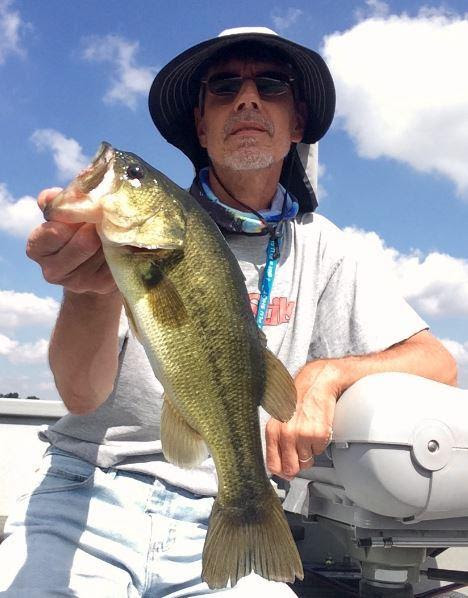 Brian Waldman and one of 255 fish taken on a single TRD TicklerZ.

“For the next month, every bass trip I took was with just this single bait, along with a tiny pack of jigheads to use and adapt as needed. As it turned out, the bait is more durable than many jig heads, as I had to throw out several over the course of challenge.”

On August 27, Waldman cracked the 100-fish barrier. “I was feeling pretty good about my chances, but found out the further into the endeavor I dove, the more nervous I became about losing that one TRD TicklerZ. I was also learning new tricks about rigging the bait on certain jig heads. I never used any glue to secure the bait, as I didn’t want to risk potentially tearing it further when I needed to change jig heads or weights.

“When you’re only using a single bait, you also get creative with presentation. I did a lot of straight swim retrieves, fishing the bait like a swim jig over grass flats and parallel to banks. Also did a lot of bottom hopping and slow swimming out in slightly deeper water. The most creative was fishing the bait like you would a frog over slop. It was cool to pitch a 1/32-ounce open-hook jig head over the mats and watch bass blow up through the veg to eat it—even though the hook occasionally trailed a wad of moss. I had to be super careful, too, about letting a large fish hang me up in the slop, as I was only using 8-pound test leader line on my medium-light spinning rod.”

By September 1, Waldman’s magic TicklerZ had allured 135 bass. “The bait was still in good shape; had all its tentacles with no big rips or tears in the material.”

One week later, he had landed 175 fish, yet the TRD TicklerZ was exhibiting only early signs of wear. “The bait looked pretty scuffed up; had all its tentacles intact, though one was partially ripped off. I was still feeling pretty good about my chances, but had over 70 fish to go.”

On September 9, near-disaster struck. “After picking up another 11 fish, panic set in when I hung my bait up on something well out in the pond,” Waldman recounts. “Luckily, a couple bow-and-arrow snaps popped the bait free. But I didn’t want to risk further snags, so I moved to another, more familiar pond, which kicked out 14 more bass. This put me at 232 total fish—all on the single softbait.” 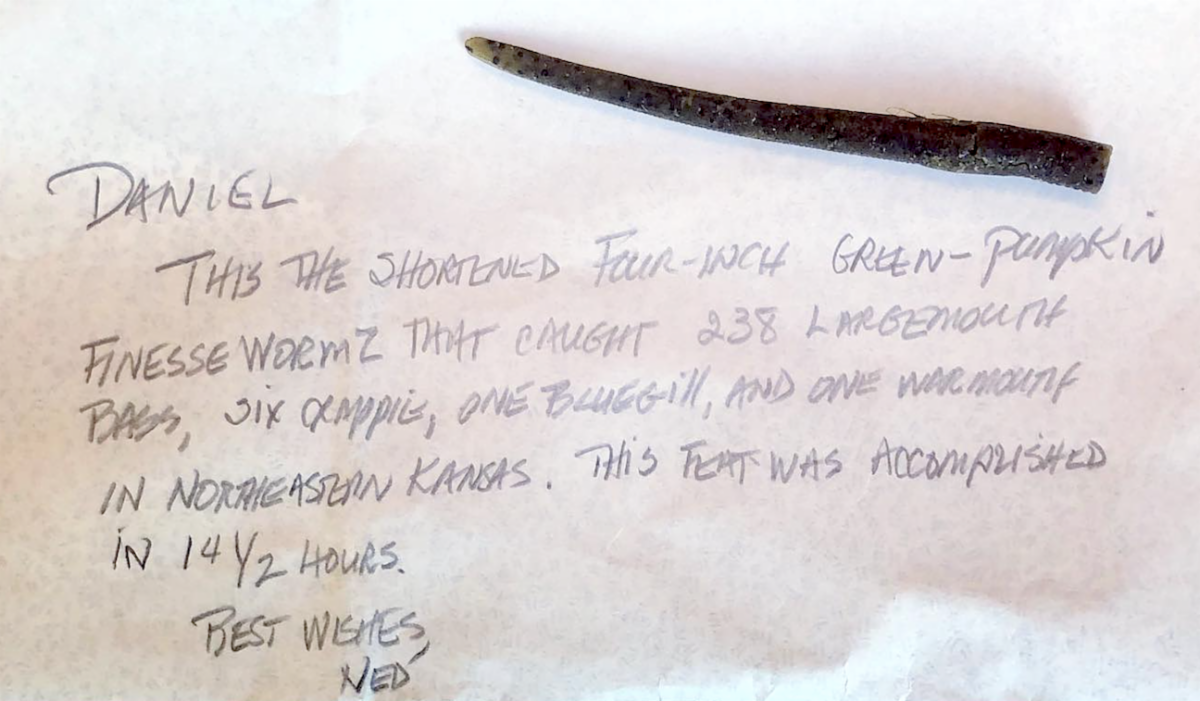 After catching another dozen bass on September 15, Waldman sat just two fish short of the record. September 16, Waldman landed 5 more bass, re-tying frequently. “Each of these bass had inhaled the bait deeply. So,I decided to re-tie again. And 11 fish in—sitting at 255 total— I’m about to pay for my excessive caution. I cut the bait off and slid a bunch of moss off the line. Not thinking, I flicked the moss off my fingers and at the same time, the bait goes flying with it—over the side of the boat and into the drink. I’m sure the look of horror on my face had to have been priceless.

“Though I had been hoping to exceed the record by 20 fish or so, I realized this was all mostly for fun—a really enjoyable quest that kept me entertained and ready to go out fishing again the next day.

“The record now stands at 255 fish. Maybe next spring, when the bass are really chomping, we’ll issue a 300 Bass Challenge. Pretty sure the right ElaZtech bait could get it done.”

Do you have what it takes to take down the all-time soft plastics record?

Previous PostSPRO® Introduces New RkCrawler Colors for FallNext PostReps. Dingell and Mast Introduce Forage Fish Conservation Bill
We use cookies on our website to give you the most relevant experience by remembering your preferences and repeat visits. By clicking “Accept”, you consent to the use of ALL the cookies.
Cookie settingsACCEPT
Manage consent