Cypress, CA – Daiwa is proud to announce that its pro staff team has swept the Bassmaster 2021 AOY race. As the news has been circulating, New Market, Minnesota’s Seth Feider took tops with 787 points followed by Chris Johnston in second, Brandon Palaniuk in third, Patrick Walters in fourth, and Cory Johnston in fifth—all official Daiwa pro staff. For Feider, the win earned him a big, shiny trophy and a check for $100,000.

“Daiwa’s BASS Elite team has had a stellar year,” said Daiwa Marketing Manager Curt Arakawa. “They have all fished well and had a lot of high finishes at numerous events. It’s been absolutely remarkable. Honestly, it’s proof that Daiwa is manufacturing the highest quality reels on the water, gear that has proven itself time and time again in the most stressful fishing situations. The team has had a lot of input on reel design. This has proved to be a winning formula for them. Having the right tools to do the job is key.” 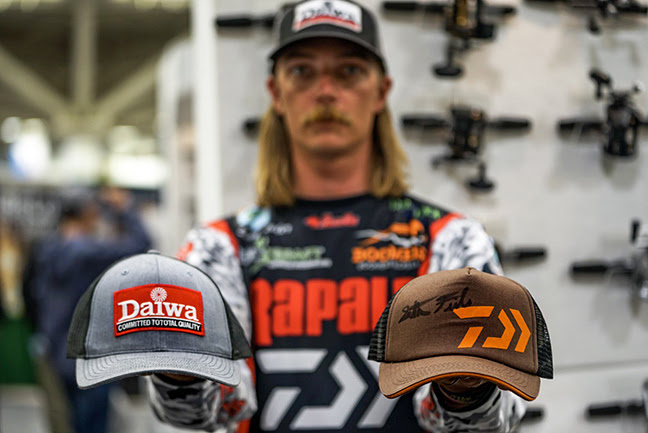 “Seth Feider has always been an amazing angler and now he has proven it to the world. We expect more great accomplishments from Seth. He’s just a superb angler and person,” added Arakawa.

Feider says that working with Daiwa has been great. “They’re all super people and it’s been great working with the entire Daiwa pro staff. We can bounce ideas off one another and tweak our equipment. It’s nice to be able to ask another guy for help and what he thinks of a certain set-up. Everyone kind of works together.”

Feider added: “Winning AOY is a major accomplishment. It’s definitely a milestone in my career. As far as my season went, it was just meant to be. I couldn’t do any wrong. I only lost fish when it didn’t matter, and I caught the fish I needed.”

High points in Feider’s season include the St. John’s River Bass Elite and the Sabine River in Texas. Feider remarked, “I thought they’d be my worst two tournaments but they ended up being a couple of my best. I finished third on St. John’s and second on the Sabine. In theory, on paper, those should have been two of my worst tournaments, but I pulled through.”

For Seth Feider, his equipment was critical to success on Lake Fork. His Toyota Tundra big bass was caught with a Tatula SV TW 103 7:1 reel. “My Daiwa reels are like an insurance policy. And the Tatula SV TW 103 proved that with the 9-pound, 9-ounce bass I boated on Lake Fork. I know it’s going to perform no matter the situation,” said Feider.

Feider also recalled his second-place finish earlier in the year on Lake Champlain and the importance of the gear. “I was using a Steez CT SV 8:1 reel. which proved the absolute perfect set-up for fishing a ½ ounce jig. The equipment performed flawlessly.”

Feider added, “One of the things I like best about working with Daiwa is their engineers really listen to us and tweak stuff just the way we want it. I work directly with R&D and they listen to us. Plus, just being part of the Daiwa BASS Elite Team has been awesome—we all made the Classic.”

“Fishing Daiwa gear has been just awesome. They have something for everything. So all my bases are covered. It’s great insurance on the water to know that I have all the right set-ups for whatever the situation calls for,” said Feider.

Looking forward, Feider said he’s going to spend a lot of his offseason with his two girls and wife, hunt, and start getting ready for next season.

Previous PostShimano School Heads Inshore with Capt. Jason CatchingsNext PostIGFA Releases 2021 Program Report
We use cookies on our website to give you the most relevant experience by remembering your preferences and repeat visits. By clicking “Accept”, you consent to the use of ALL the cookies.
Cookie settingsACCEPT
Manage consent