Work crews on Feb. 24 will begin lowering the Edenville Dam Tobacco River spillway, bringing down water levels behind the structure. As the water recedes, dangerous and unstable ice conditions will develop and pose a significant risk for recreational users. The public is warned to stay off the ice and the newly exposed bottomlands until further notice.

The spillway will be lowered by more than 20 feet, increasing its capacity to alleviate the risk of future flooding downstream and restoring the natural flow of the Tobacco River. Water levels are expected to drop about 12 feet behind the dam, and less upstream, by the second week of March.

The area of unsafe ice conditions is between Dale Road and the remaining portion of the dam west of M-30. As the water level drops and its velocity increases, the ice will become destabilized or could break apart, creating dangerous conditions for anglers or outdoor recreators. The receding water is also expected to expose unstable bottomlands, steep channel slopes and previously unseen debris, tree stumps or other hazards.

Caution also should be taken on the Tittabawassee River above the breached section of the dam – where the drawdown could lead to shifting and unstable ice – and below the dam on the Tobacco River, as increased flow over the spillway and through the newly cleared river channel is expected to change water velocity and ice conditions. 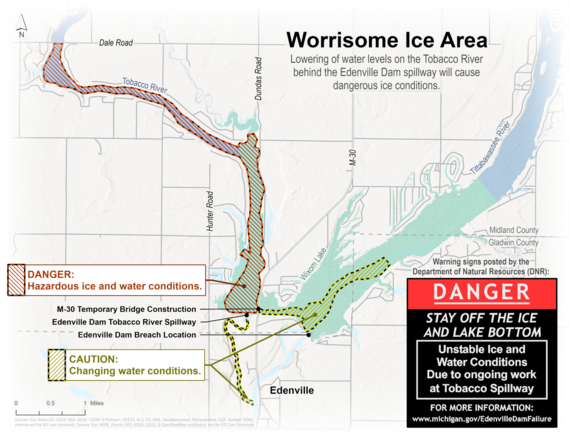 Click on map to bring up a larger version.

EGLE has partnered with the Michigan Department of Natural Resources and the Gladwin County Emergency Management Office to alert the public about the impacts of the water drawdown above and below the dam. As project work is expected to continue into the summer, residents and visitors are warned to stay clear of the dam worksite, as well as the nearby construction site for the M-30 temporary causeway bridge by the Michigan Department of Transportation.

Lowering the spillway is an integral part of the emergency dam work that was started in December to alleviate concerns over the possibility of a future flood that could send a 10-15-foot wave of water downstream should the dam fail a second time. Work is also being done to restore the Tobacco and Tittabawassee Rivers to their natural channels and clear debris and sediment to help protect area residents and businesses.

For more information on the water level changes:

The Edenville Dam failed in May 2020 after significant rainfall stressed the Edenville Dam, which breached, and the resulting torrent of water overtopped and breached the Sanford Dam further downstream. More than 11,000 people were evacuated and 2,500 structures damaged by the floods.

An independent forensic investigation continues into the cause of the dam failure.

The current emergency work will have no impact on future decisions on whether to rebuild the dam. Four Lakes Task Force, which owns the dam, and local stakeholders will make that determination. EGLE is fully committed to working with stakeholders to make sure any decisions that are made on the future of the dam are carried out in a safe manner and in accordance with applicable laws.

Other dam failure resources are posted at Michigan.gov/EdenvilleDamFailure.

Previous PostFrabill’s Floating Trout Net FamilyNext PostSPRO Adds Color to Angling Hardware
We use cookies on our website to give you the most relevant experience by remembering your preferences and repeat visits. By clicking “Accept”, you consent to the use of ALL the cookies.
Cookie settingsACCEPT
Manage consent