Ladson, SC – – Kristine Fischer had won before. But this one felt different. Bigger. Somehow, more meaningful. Like a quarterback winning a third Super Bowl; cementing their place in history and making some sort of definitive, lasting statement.

But unlike all those other pro athletes who celebrate championships with time away from the sport—or a sojourn to Disneyland—after the event, Fischer simply jumped in her truck and steered toward her favorite muskie river. Call her a trailblazer if you want. But as far as Fischer’s concerned, she’s simply a diehard angler, someone who loves the pursuit of big fish and the opportunity to solve an underwater mystery.

Mystery, indeed. For prior to the 2021 Hobie Bass Open Series (BOS) Tournament of Champions, Fischer had never cast a lure in Alabama’s illustrious Lake Eufaula. The culmination of a ten-tournament calendar, the three-day Championship (November 12, 13 and 14) hosted fifty of the top-qualifying anglers, all vying for a $35,000 first-place paycheck—plus shots at the Angler of the Year award and a berth in the Hobie World Championship.

“I’d never fished Eufaula in my life,” noted the Z-Man Fishing pro, among the top kayak bassers in North America. “I watched a lot of the old Bassmaster Elite events there; tried to gain some knowledge of fall patterns. Eufaula has this reputation for its offshore ledge and deep brushpile bites—especially prominent now with the rise of live-scan sonar. 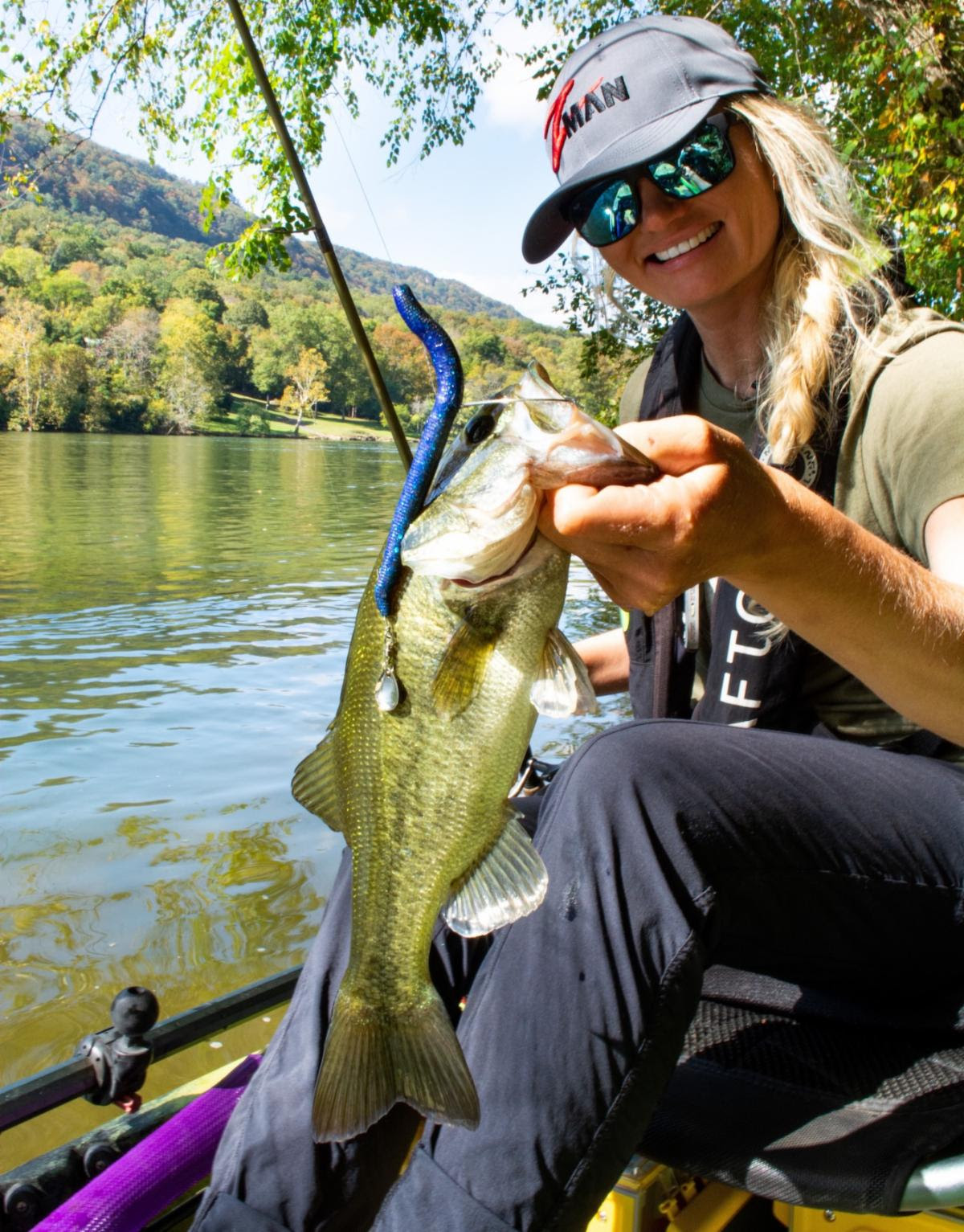 “But going in, I felt more confident leaning on my strengths, which include breaking down shallow structure with power-fishing methods and then, dissecting the cover with Z-Man softbaits, like the Mag FattyZ. Problem was, the bass were in a sort of fall transition and the bite was proving funky and really tough for a lot of the anglers.”

The reality of a tough offshore bite and scattered bass led Fischer to trailer and launch in a different area on each of the three tournament days. “I was actually fishing brand new water every day—almost like I was practicing during the event. Probably paddled at least five or six miles on each day. But it allowed me to find a little micropattern, which consisted of bass in 6 to 8 feet of water, holding on grassy banks. A lot of my better bites came on areas where the deep channel swung close to shore, as well as creek intersections and secondary points.”

On day-one, Fischer fast-cranked a swimjig to locate bass, eventually slowing down and flipping a Z-Man Mag FattyZ—one of the favorite worms among Hobie competitors—on a 5/16-ounce weight. She also fished the bait on a Tokyo rig, which hovered naturally just inches above bottom. Similarly, Fischer caught fish punching a Billy GOAT creature bait on ¾- and 1-1/2-ounce tungsten weights into thicker grass and shoreline timber.

“That day, two other good anglers showed up at that same ramp. Both went to the choice creeks, so I decided to just start in a somewhat random area and begin dissecting it,” recalled Fischer. “These Z-Man ElaZtech baits, like the Mag FattyZ™ and GOAT™, have been so money in tournaments that they’ve become go-tos for a lot of kayak competitors. 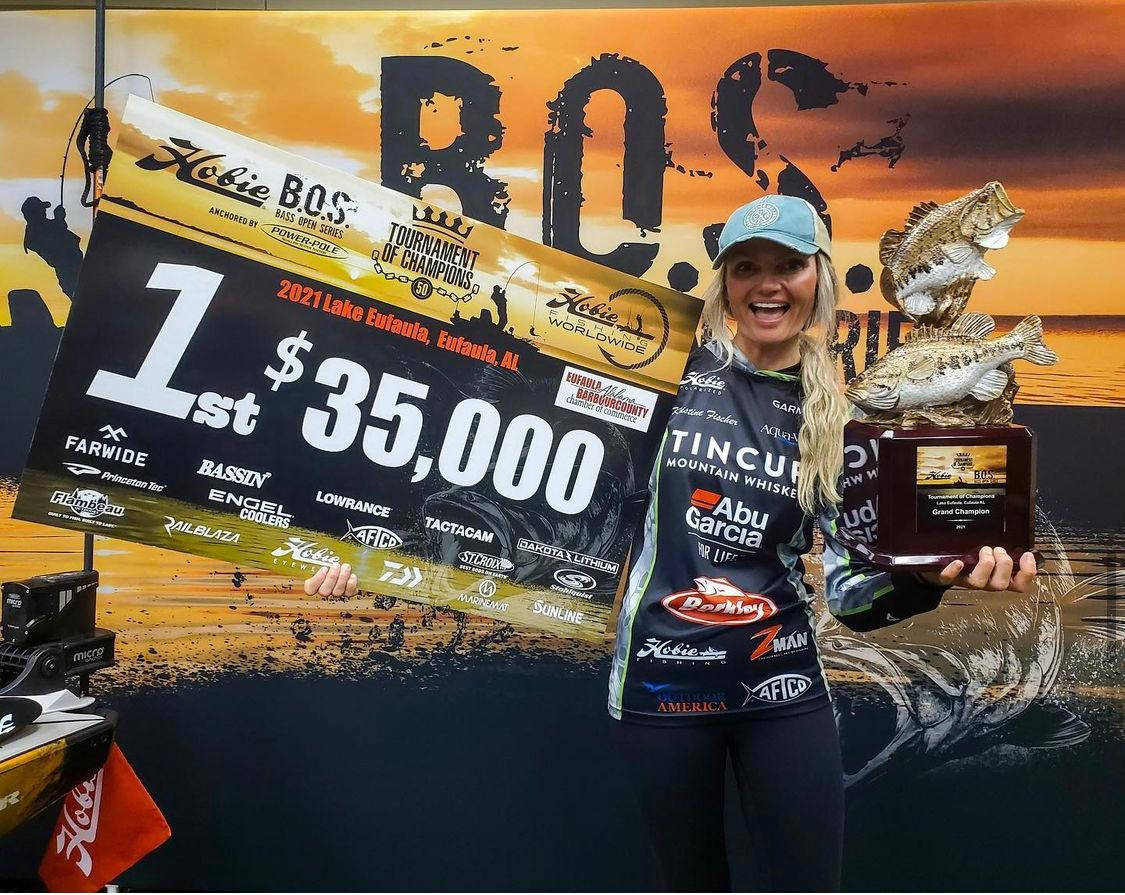 “As many of us have discovered, the GOAT performs excellent for flipping in grass. You barely twitch the rod and the bait comes alive. It’s so naturally buoyant that bass consistently eat it, even while it’s deadsticked; twin leg appendages slowly elevate and hover when you stop the retrieve.

“The other key thing with these ElaZtech baits is their durability. I fished the entire tourney with one or two GOATS and Mag FattyZ. Meanwhile, you would have torn up and used at least a dozen regular soft plastics per day. For kayak anglers who need to be well organized, efficient and travel light, ElaZtech is the ultimate bait solution—and it certainly held true at Eufaula.”

By the end of day-one, the Weeping Water, Nebraska angler sat in 11th place, having caught and registered five bass for 77-inches. She trailed tourney leader Matthew Brannon by just over 10 inches. An instant catch-record-release format at all Hobie BOS events assure the health of the bass, allowing anglers to register their five biggest fish.

“Fishing Lake Eufaula is so tough it almost reminds me of muskie fishing,” admitted Fischer, with a nod to her beloved, though elusive toothy predator, known occasionally as the fish of a thousand casts. Adding further adversity was an approaching coldfront, with overnight air temps pushing into the sub-freezing zone.

Showing off her rare talents to block out distractions and simply focus on the bass, Fischer approached day-two with competitive fire. Rather than suffering a cold-front induced setback, she continued her methodic break-down of available habitat. Fishing a new area once again, Fischer relentlessly flipped and punched a combination of watermelon-red pattern Mag FattyZ and Billy GOAT baits. Despite the conditions, Fischer improved on her day-one catch, logging a respectable 80.5-inches of Eufaula bass, tied for second place with two other anglers, including 2020 Hobie BOS Champion and Z-Man pro, Ryan Lambert. Fischer also sat in 2nd place for Hobie Angler of the Year.

After two days of concerted fishing pressure, Eufaula’s bass proved even pickier on the final sortie. “I had to really slow things down,” Fischer noted. “Switched to a fluke style bait and then, dug into my bag of tricks for somewhat of a secret presentation, which I sort of hate to let out of the bag,” she laughs.

Having lipped four good bass and needing a final kicker fish to cap her five-fish limit, Fischer rigged up a weightless Z-Man ZinkerZ stickbait, ‘spicing it up’ with a bit of extra bling. “Adding subtle levels of flash and vibration to a subtle stickbait presentation, I’ve become a huge fan of what Z-Man calls the TRD SpinZ™ tail-spinner. I always use the one with a little gold Colorado blade. Sticks right into the tail of the bait. You can fish it so many different ways; swim it, stop-and-go, or just let it fall and fluttering the blade. When I desperately need at least one more big bite, this little combo has been a gem; once again, it produced the bass I needed at Eufaula.”

A day-three total of 83-inches, including sizeable 18 and 19 inch bass, yielded a final total of 240.5-inches, just over 4-inches more than second place finisher Jordan Marshall. Spanning three days, numerous unfamiliar locations on a lake she’s never fished amid a wintry coldfront—all during the notoriously tough fall transition—Fischer’s ability to catch bass evidenced a remarkable consistency. Her 2021 Hobie BOS Tournament of Champions victory earned Fischer a cool $35k, as well as an automatic entry into the 2022 Hobie World Championship. Fischer’s performance also landed her in 2ndplace in the Hobie Angler of the Year race, good for another $3k in cash. 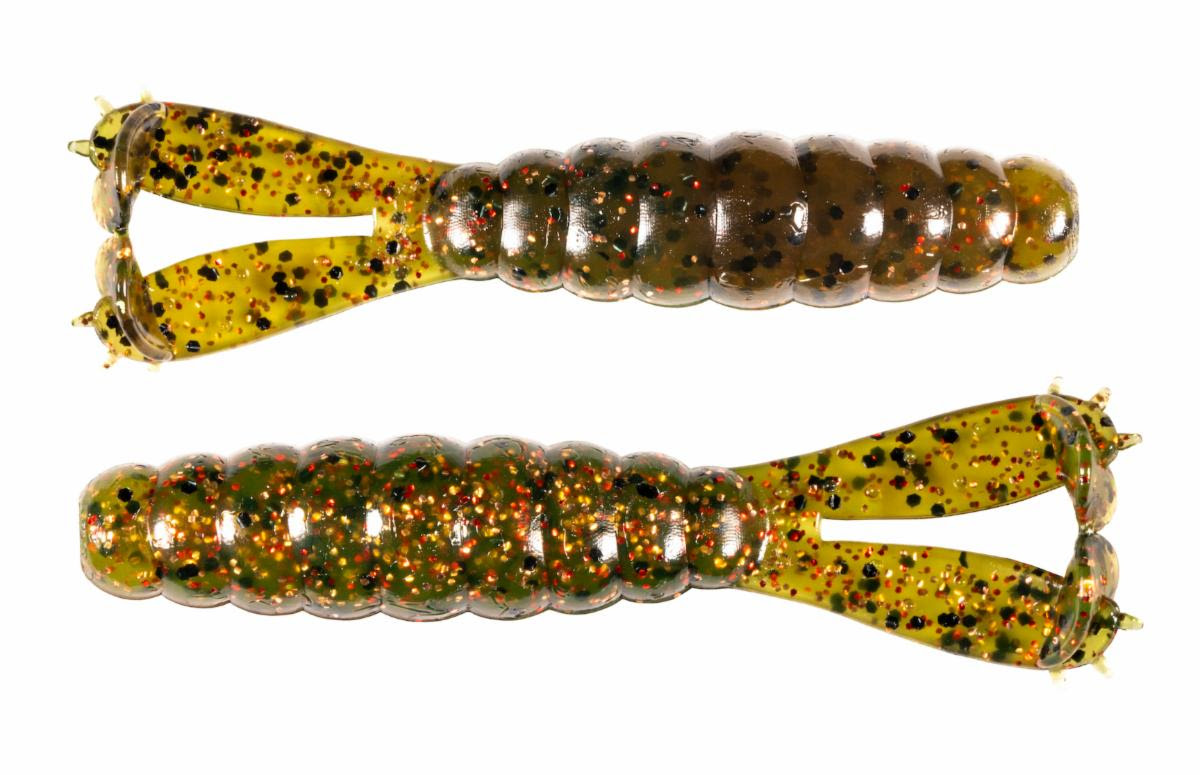 “All I know is, I’m taking a break, going muskie fishing,” lamented the universally admired, though drained Fischer, who’s social media lit up with glowing congratulations from hundreds of fans and friends. During her northward drive, Fischer reflected on the win and what it possibly all means.

“How am I feeling? Guess you might say it’s the good kind of ‘overwhelmed.’ Humbled and so blessed, too. I’ve got so many great friends, fans and wonderful sponsors like Z-Man that keep me going with constant encouragement. No way I’m here without them.

“Truthfully, I’ve always resisted the whole female angler thing,” she adds. “I’m a fisherman first. Don’t know it’s fair that I get any more coverage than when one of these terrific male anglers win. But if somewhere out there, say a young female angler sees me holding a big bass and a trophy, and it inspires her to chase this dream, then I couldn’t be happier about that.” 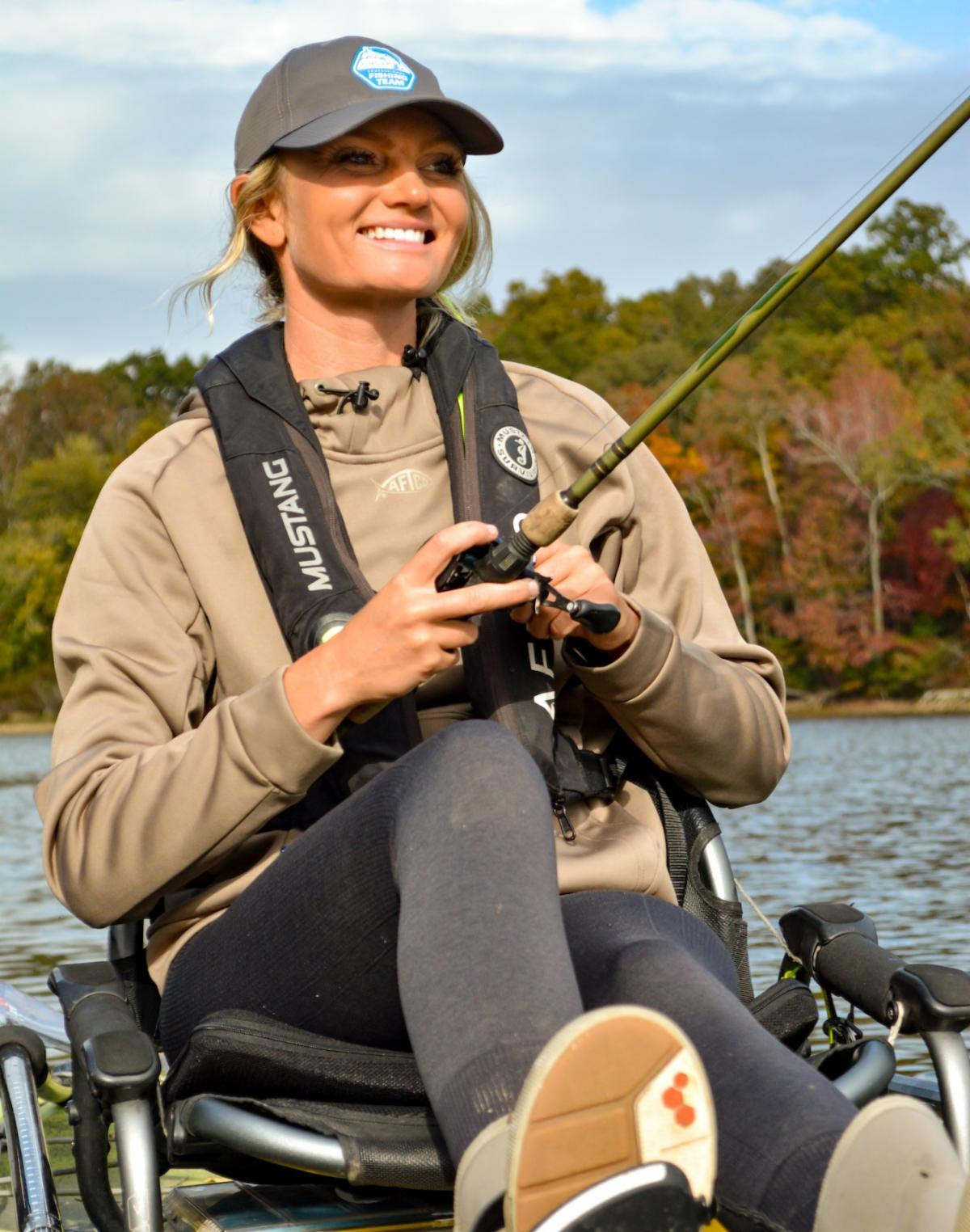 Previous PostZ-Man ElaZtech Lures Solve a Conservation DilemmaNext PostLouisiana Studies Vegetation Decrease in Toledo Bend
We use cookies on our website to give you the most relevant experience by remembering your preferences and repeat visits. By clicking “Accept”, you consent to the use of ALL the cookies.
Cookie settingsACCEPT
Manage consent