When it comes to ice lures, I’m no different than any angler in wanting to check out new offerings from year to year. No matter how full our tackle boxes and stuffed our ice houses are of tackle, there’s always a few things that catch my eye each season. For good reason too; with another year of product development, customer recommendations, new bites, and the evolution of the sport, there’s a lot that happens in a single season on ice or open-water for that matter.

That’s not to say that all lures and new baits are worth their weight in gold. I’m especially leery of the way-out-there versions that seem more gimmick than great and tend to hang on marketing premises more than what we’ve learned fish like year in and year out. Instead, I tend to focus my attention on new wrinkles on old baits, or ways of re-imagining or using differently the same staples that stud our tackle boxes each season.

That’s why I was excited to try out the Northland Buck-Shot Coffin spoon after I had a chance to try some samples. With a name that’s got “Buck-Shot” in it, you can already guess that it rattles. In this version, the brass rattle is even louder than the original, which had my mind turning to particularly stained or turbid water bodies. With a flipper on the split ring near the treble, there’s also a kicker fin similar to what’s out there in the Macho Minnow Spoon. With the combination of the rattles and that kicker fin, it’s probably the loudest spoon I can think of below the ice, and one of the louder lure options in general. I like the idea of drawing fish away from distance, so right away my interested was piqued.

Then comes the construction of the spoon itself. It reminds me a bit of the old “stop-sign” spoons that have been popular on Lake of the Woods and other areas in the past, but with an upgrade to fit, finish, and flash. Those strong beveled edges present simply more surface area and angles for flash and color to display, but maybe more importantly, they help the bait perform this rolling tumble on the drop. It’s really a lure that you should drop on an underwater camera to appreciate the action of, as it performs some different tricks when you drop at various rates and jig as you would traditional spoons. Start first on camera by observing the drop and the roll, experimenting with shorter drops that culminate in a still rod tip. Check out how the bait settles out before giving it a quick snap and another drop, as the bait will do different things coming out of short snaps versus slow lifts. All of these little nuances should be called into action the next time you’ve got a sniffer instead of a biter, and small rhythms and cadence changes can yield big dividends when fish aren’t as aggressive.

I’m a fan of the color schemes like UV Tiger, Pink UV, Superglo Red, Wonderbread, Sneeze, and so many of the other creative color palettes that you find in the rest of the Buck-Shot lineup. The same can be said for the various sizes. In testing, I was able to target trophy crappies with the 1/16oz version, then fish deep walleyes the same day with the 3/8oz variety. The 3/16oz offering should be standard issue for most walleye and perch anglers too, offering another look and feel to what so many anglers love in the traditional Buck-Shot spoon. 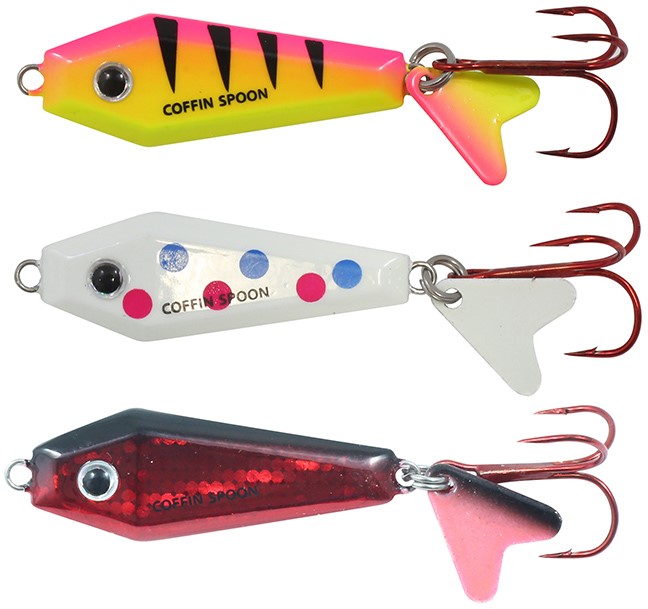 Quality hooks and rings are a part of the construction as well, given that you’ll likely be hooking some hard-mouthed toothy critters, whether they be walleye or pike. Poor hooks not only don’t do the job they need to at hook-set, but they wear out quickly with multiple un-hookings over time. A pliers can wreak havoc on a poorer hook, but I’ve been impressed with the quality components on these new Buck-Shot spoons.

If you’re an angler that frequently fishes stained, cloudy, or turbid water bodies like Lake of the Woods, Devils, Upper Red, or others, these would be something to check out. I plan to fish them more extensively for panfish this season too, as basin bites can be finicky, especially midwinter, without anything to draw fish at distance from the sides of your location. So often too, baits like these may not close the deal, but bring fish closer for a better look at your live-bait where you ultimately catch them. That makes them invaluable during deader parts of the year when not much else gets a fish to come by and check out your spread.

Previous PostBrunswick Reports Record Sales at Fort Lauderdale Boat ShowNext PostRestored Lake Poinsett Gets Catfish Stocking
We use cookies on our website to give you the most relevant experience by remembering your preferences and repeat visits. By clicking “Accept”, you consent to the use of ALL the cookies.
Cookie settingsACCEPT
Manage consent