BEMIDJI, Minn.  – Ice fishing is here, and it’s time to outfit boxes with tackle selections that flat-out catch fish. Along those lines, we talked with Northland Fishing Tackle pro and veteran guide Brian “Bro” Brosdahl about how he targets early ice walleyes and perch. At the top of his list? Two brand-new spoons he had a hand in designing in collaboration with Northland lure crafters. If catching more walleyes and sag-bellied perch is your thing, you’ll definitely want to read on… 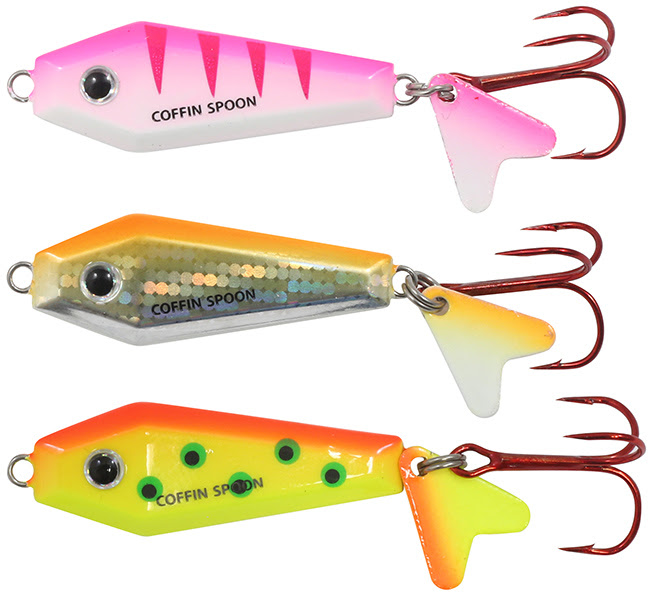 Among his favorite baits to use for walleyes and jumbo perch is the new Buck-Shot® Coffin Spoon. “I like the Coffin Spoon’s slab-style profile that has an erratic action. Every time you jig it does something a little different; sometimes it flips, sometimes it shimmies back down toward the fish. With a brass rattle and a kicker tail, it makes a lot of noise, too. Tip it with a minnow head and drop it down and let it go. Available in 12 fish-catching colors, it’s just fantastic,” said Bro.

How to Fish the Coffin Spoon

“The Northland Buck-Shot® Coffin Spoon is an aggressive search bait for walleyes and perch,” said Bro.

For walleye fishing, a 3/8-ounce is a great size to start with and drop to ¼-ounce if the fish aren’t as tempted to strike.

Bro noted: “I’ll use a 3/8-ounce in as little as eight to ten feet of water all the way up to the thirties. But you’re going to want to drop it down to a ¼-ounce—even an 1/8-ounce—when you’re fishing less aggressive walleyes. For perch, an 1/8-ounce is about perfect. If you’re on big, aggressive perch, go to a 3/16-ounce and you’ll be in the ballpark. You can tip it with a minnow head, but adding two or three waxworms or maggots instead works perfectly for perch.”

Next on Bro’s list for favorite ice baits is the aptly-named Bro Bug Spoon, the slender weapon with sticky hook treble and protruding buggy eyes.

“One of my top ways to fish walleyes—especially basin-dwelling eaters—is to use work the new Bro Bug Spoon. In terms of what it resembles, a Bro Bug Spoon represents young-of-the-year perch or insect larvae. Add a chandelier of maggots or a minnow head and watch it perform. I’ll fish a ¼-ounce and even drop down to an 1/8-ounce. But typically for big perch, an 1/8 does it. And it’s available in a 1/16-ounce version for when perch get finicky,” noted Bro.

When it comes to working the new Bro Bug Spoon, it’s as simple as hopping the bait, followed by a pause to let it fall back in place. Bro confided: “A slow shimmy and shake works well on neutral fish with just the bait on the hook moving. The fish will become more aggressive and eat it. Sometimes, the fish won’t come up and slam it, they’ll approach slowly and just scoop it up. Two foot-hops to start with half to one-foot follows work well.”

Chances are, your ice tackle boxes are already full of proven Northland performers like the Buck-Shot® Rattle Spoon, Buck-Shot® Flutter Spoon, Forage Minnow, Macho Minnow and more. Now is the time to get onboard the train that pro staff and insiders blazed across the Ice Belt last winter pre-fishing these new gems… To put it simply, the Buck-Shot Coffin Spoon and Bro-Bug Spoon are must-haves for hardwater walleye and perch aficionados everywhere!

Previous PostN.C. Blue Crab Harvest Closed Briefly in Some Areas Next YearNext PostMichigan Dams Removed to Restore Waterways
We use cookies on our website to give you the most relevant experience by remembering your preferences and repeat visits. By clicking “Accept”, you consent to the use of ALL the cookies.
Cookie settingsACCEPT
Manage consent