PARK FALLS, WISC.  – New Berlin, Wisconsin anglerBill Schultz began keeping a fishing log in 1992 when he got back into fishing. It began as a simple and practical way to keep track of the details surrounding his days on the water. What began 29 years ago as a tool to help him become a more effective angler has grown to become a voluminous tome today.

Somewhere along the way, Schultz’s competitive nature – spawned from his collegiate swimming career at the University of Wisconsin and nearly 50 years of playing racquetball – took over. “The process of setting goals and then putting in the effort to achieve them is what makes winning possible,” he says. “It was all those swimming practices and thousands of hours on the racquetball court that led to my improvement and, ultimately, the successes I enjoyed in competition. So, after catching my first smallmouth bass in 1994, I began setting goals for myself with respect to my smallmouth fishing. About 15 years ago I set the goal to catch and release 1,000 smallies per season. Then I set the bigger goal to catch 25,000. I have committed the time to work towards each of these goals each season, and while I haven’t always achieved them, the process has helped me become a better angler.”

When the ice receded and revealed Schultz’s open-water arena earlier this year, his smallmouth log listed over 24,000 catches. Schultz knew 2021 could be the year he hit 25K. An August sojourn to Lake Michigan’s storied Green Bay put him there.

“I love river fishing, and rivers have accounted for many of my catches over the years,” Schultz says. “But I wanted to be up on Lake Michigan in Door County to maximize my chances for a bigger fish for number 25,000. So, with just two fish to go, that’s where I headed.”

Schultz says fishing on the morning of August 4 was slow, but he wasn’t discouraged. “I caught a small, two-pound smallie for number 24,999,” Schultz says. “And shortly after noon I got what I was hoping for.” The bass Schultz refers to – a fat 4.5 pounder – came on a 2.5” tube in about six feet of water. Like the rest of the smallmouth he had caught and logged over the previous 24 years, the historic bass came on a St. Croix fishing rod – specifically, a 7’3” medium power, extra-fast action St. Croix Victory casting rod.

“A fishing friend of mine had wanted to be out with me to video the catch, but I had to drop him off early and I was fishing by myself,” Schultz reports. “I used my RAM camera mount on the windshield for a couple pictures, put the bass in the livewell, and then put a video camera up to record a short video to document the historic catch!”

A St. Croix pro-staffer, Schultz has had a relationship with the Park Falls, Wisconsin-based rod crafters and has been fishing with the Best Rods on Earth® for 24 years now. “It’s been really rewarding to be involved with an American company that’s done so much for anglers over the years,” says Schultz, who has been involved with many of the company’s rod introductions but has never been as excited as he was by this year’s Victory Series launch.

“These rods are really special because they bring American-crafted, technique-specific, high-performance fishing to any bass angler. They released the first eight rods in the series earlier this year, then announced at ICAST that they’d be adding 17 more models to the lineup. All those new rods just became available to anglers last week, and I’m looking forward to adding a few of them to my arsenal.”

Schultz’s simple passion for chasing smallmouth bass has grown into speaking at over 100 sports shows and fishing clubs, writing dozens of articles, and communicating regularly with thousands of other smallmouth enthusiasts on social media. ““This journey has been so much fun,” he says. “I place a high value on being a part of the smallmouth-angling community and love interacting with other anglers.”

You may be wondering what’s next for Schultz. “I’m having my best numbers year yet,” he says. “I’m still just out there having fun, continuing to learn, and trying to become a more effective angler. The 25,000 landmark catch has come and gone. I’ve already caught and released over 2,500 smallies this season and expect to end the year with my tally at close to 27,000.” 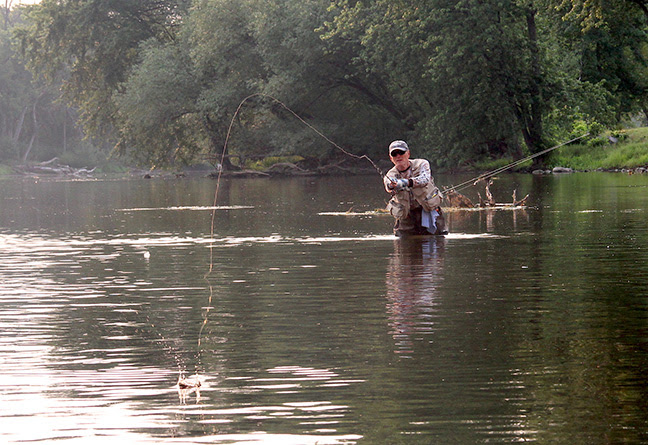 Previous PostNavico Hires New Territory ManagersNext PostRapala, VMC and Terminator Help Huff to Bassmaster Wins
We use cookies on our website to give you the most relevant experience by remembering your preferences and repeat visits. By clicking “Accept”, you consent to the use of ALL the cookies.
Cookie settingsACCEPT
Manage consent